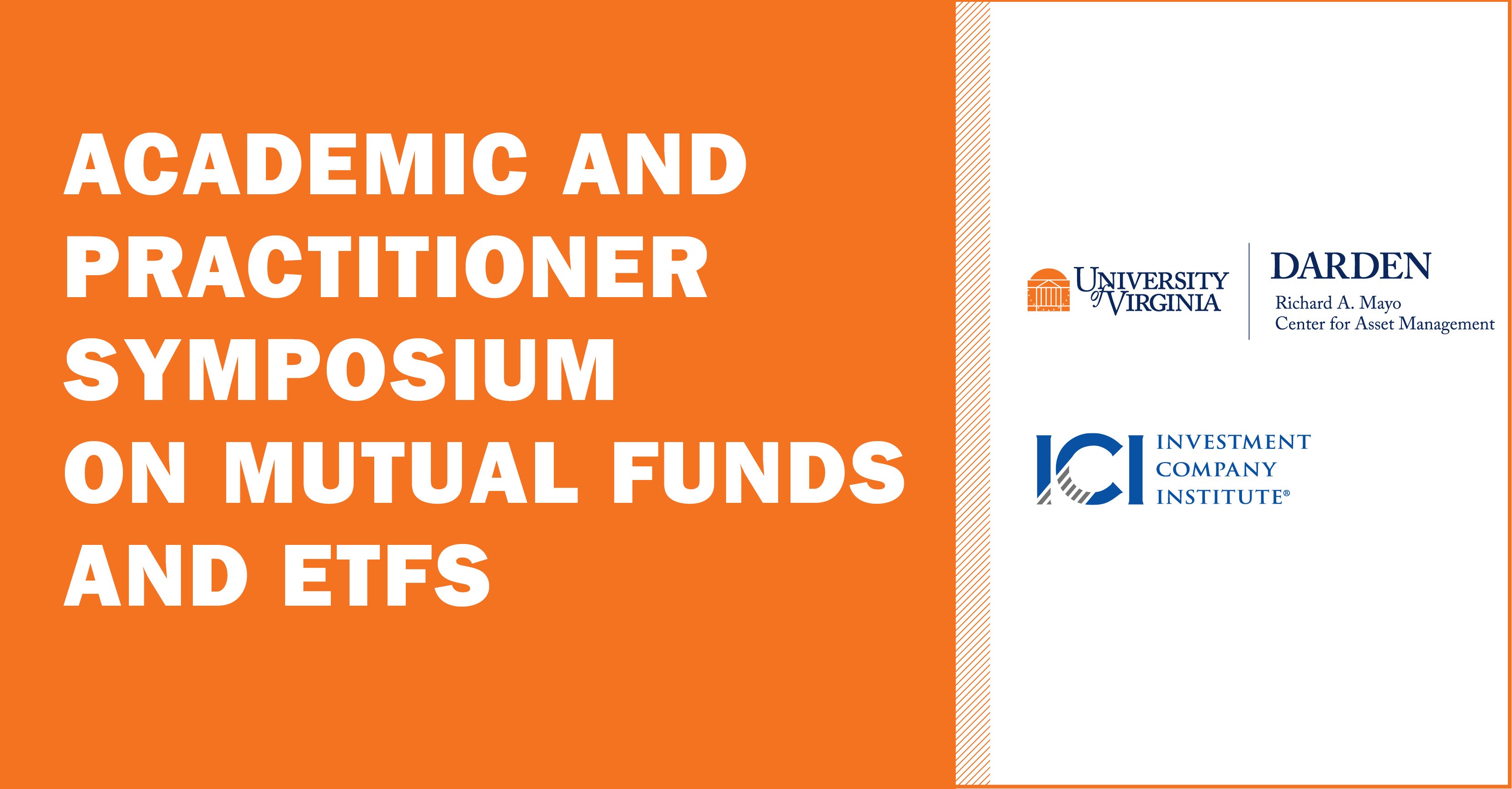 Co-hosted by the Investment Company Institute and the Richard A. Mayo Center for Asset Management at the Darden School of Business, this year’s symposium focused on the rapid growth of private markets over the past decade. Institutions are allocating an increasing proportion to the private markets, traditional buy side public equity investment firms are investing in private assets, and research questions regarding capital formation, regulation, and valuation abound. This year’s Symposium was dedicated to exploring these issues in what promised to be a focused, high-quality program featuring leading scholars and practitioners at the intersection of these emerging topics.

The one-day conference consisted of three keynote speakers, two panel discussions and three invited academic papers. Academic papers were presented by the author and had a practitioner discussant and an academic discussant.

Paul Schott Stevens has served as president and CEO of the Investment Company Institute since June 2004. Stevens has steered ICI during some of the most challenging years in its history, through the financial crisis and beyond. He has led ICI’s efforts on a series of crucial issues—money market fund reform, passage and implementation of the Dodd-Frank Act, and critically important fiscal and tax issues. In 2011, he directed the launch of ICI Global to respond to the globalization of fund investing and regulation, and has consistently championed the role of investment funds and defined contribution plans in providing for retirement internationally. Prior to ICI, he practiced law in Washington for many years, most recently as a partner in the financial services group of Dechert LLP. In addition, Stevens served in senior government positions at the White House and Defense Department, including as special assistant for national security affairs to President Ronald Reagan and as chief of staff of the National Security Council. Upon leaving government service, he was awarded the Defense Department’s Medal for Distinguished Public Service, its highest civilian decoration.

René M. Stulz is the Everett D. Reese Chair of Banking and Monetary Economics and the Director of the Dice Center for Research in Financial Economics at The Ohio State University. He has also taught at the Massachusetts Institute of Technology, the University of Chicago, and the University of Rochester. He received his Ph.D. from the Massachusetts Institute of Technology. He was awarded a Marvin Bower Fellowship from the Harvard Business School, a Doctorat Honoris Causa from the University of Neuchâtel, and the Risk Manager of the Year Award of the Global Association of Risk Professionals. In 2004, the magazine Treasury and Risk Management named him one of the 100 most influential people in finance. Reuters includes him in its list of the world’s most influential scientific minds. He is a past president of the American Finance Association and of the Western Finance Association, and a fellow of the American Finance Association, the European Corporate Governance Institute, the Financial Management Association, and the Wharton Financial Institutions Center. René M. Stulz was the editor of the Journal of Finance, the leading academic publication in the field of finance, for twelve years, and co-editor of the Journal of Financial Economics for five years. He is on the editorial board of more than ten academic and practitioner journals. Further, he is a member of the Asset Pricing and Corporate Finance Programs and the director of the Risk of Financial Institutions Group of the National Bureau of Economic Research. He has published more than one hundred papers in finance and economics journals, including the Journal of Political Economy, the Quarterly Journal of Economics, the Journal of Financial Economics, the Journal of Finance, the Review of Financial Studies, and the Harvard Business Review. He is the author of a textbook titled Risk Management and Derivatives, a co-author of the Squam Lake Report: Fixing the Financial System, and has edited several books, including two volumes of the Handbook of the Economics of Finance.

George C.W. Gatch is the CEO of J.P. Morgan Asset Management's Funds and Institutional businesses, globally. As CEO, he oversees all sales and service efforts for Global Funds Management, the sixth-largest, actively managed mutual fund complex in the world in terms of assets under management, and Institutional Asset Management, which provides investment solutions to many of the world’s largest institutions, endowments and foundations, and insurance companies. Gatch is also a member of the operating committee of JPMorgan Chase & Co.’s Asset & Wealth Management line of businesses, which oversees $1.9 trillion in assets under management. Institutional Investor has twice named Gatch “Fund Leader of the Year” — in 2006 for overseeing the largest mutual fund merger in U.S. history (between J.P. Morgan and Banc One); and in 2011 for overseeing J.P. Morgan Funds’ leap in assets to become the first bank-owned funds complex to break into the Top 10. In 2012, Gatch was inducted into the inaugural "Mutual Fund Industry Awards Hall of Fame," established by Fund Director Intelligence and Fund Industry Intelligence to recognize continued excellence in the mutual funds industry.